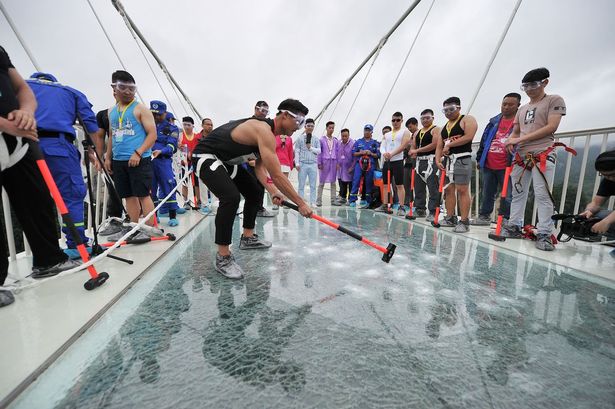 Check out this article from the Mirror

Volunteers lined up at the side of the walkway ready to smash the panels with sledgehammers to test the strength of the bridge.

Brave volunteers and staff took a crack at a glass bottom bridge in China with sledgehammers and a car this weekend – in a bid to prove its safety.

They tested the structure suspended 300 metres (984 feet) above the Zhangjiajie Grand Canyon in Zhangjiajie National Park of central Hunan province, by hitting some of the glass panels with sledgehammers.

But that wasn’t the end of the test by any stretch.

After the glass had been cracked – a 4×4 car was driven over the shattered panels as nervous onlookers watched carefully, harnessed to the side of the walkway. Before the test, Ma Liang, the bridge’s chief engineer, said: “The overall thickness of the glass is five centimetres.

“We use a method of gluing together every panel to tighten the area between them. The thickness of every glass panel is 1.5 centimetres.

On Saturday morning, around 20 volunteers and staff were taken to the 430-metre-long bridge and harnessed to its sides as a precaution.

They hit some of the panels with sledgehammers and afterwards a 15-tonne SUV was driven over them, showing the structural strength of the glass panels.

None of the volunteers were able to smash completely through the glass , which mostly broke into pieces. The volunteers were later invited to walk over the shards and damaged panels.

“When I see the ground I feel a bit dizzy. I mostly will look in front of me, I won’t dare look at the ground. I have a dizzy feeling,” Li Hai, a member of Zhangjiajie Park staff and event participant said.

Israeli Haim Dotan, who designed the Expo 2010 Shanghai’s Israel Pavilion, is the chief architect behind the project and China Construction Group, which was hired for the bridge’s construction.

An investor founded Zhangjiajie Grand Canyon Co. Ltd to to carry out the project and has put a total of around 250 million yuan (£28 million) into the bridge’s construction.

The designers claim it is the largest of its kind in the world.

Construction on the bridge began in June of last year. Zhangjiajie National Park has not announced an official public opening date for the bridge, but Chinese media has reported it will be in July this year.

Safety has been an issue at another glass bridge in China. Last October, tourists at Yuntai Mountain Park in northern Henan province reported cracks in a glass panel .

Since then, the Yuntai Mountain Park bridge has been closed for maintenance.