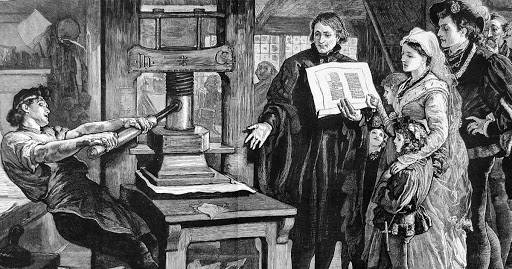 Too much on their plate…

When Guttenburg invented the printing press in 1450 I doubt he’d imagine that it would change the world.

Before then the only way to make books was by hand.  Gorgeous hand-illuminated things which took teams of monks years to produce.

It didn’t matter much.

At the time no one could read, and the book was in Latin anyway.

One of Durable’s first staff handbooks. All our installers were fluent in Latin. Probably.

But once people started to read, printing presses were essential.

The print industry is in decline.

Everything is ‘online’ now – even newspapers [which is a bit weird as they have the word ‘paper’ in the title…].

Everything is ‘digital’ – even print.

If you were to invest in a print plant now you’d be mad.

Contracts wouldn’t be worth the paper they were printed on.

In fact, you may as well put your remaining cash into a 3D printer so you could print the gun with which to shoot yourself in the foot.

But – in the 70’s & 80’s there was big money to be made – with the burgeoning magazine, advertising, and marketing industries – print was huge.

One of Durable’s customers back then was Hazel, Watson & Viney – a big print company based in Aylesbury.

They had several problems which a clever installation of window film easily fixed.

At Hazel, Watson & Viney’s giant printing complex in Aylesbury, APR printing plates are produced using ultra-violet light to harden a polymer used in this particular process. Any stray UV rays from the sun entering via the windows cause premature hardening to the detriment of the system, so Hazell’s had Scotchtint P-40 solar control film from 3M applied to the windows to exclude the troublesome rays.

At the same time, Scotchtint P-19A window insulation film was applied to the roof lights in the APR room to conserve interior heat during the winter and to prevent excessive heat build-up from the sun during the summer. Both films were applied by 3M-approved dealer/applicator Durable Solar Control Ltd of Henley-on-Thames.

There you have it.

Simple and effective – window film is a brilliant solution to a multitude of problems with glass.

Other things that were ‘big’ in the 80’s

Many people feel that the 80’s was the best decade for music.

Mostly people of a certain age – true – but it was a diverse and vibrant period for popular music.

We are the oldest window film company in Europe. We have over 50 years of experience. We are very good with glass.